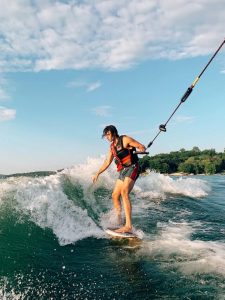 Connecticut has a reputation for wealth and pretension.

And while you can find that, if that’s what you’re into, that’s not all you’ll find here.

In fact, in this Connecticutians mind, there is much that is unique, quirky, quaint, and charming about the state.

Take Danbury, Connecticut. Many of the best things to do in Danbury, CT, are wonderfully unique.

Tucked away from the Connecticut shoreline yet still part of Fairfield County, Danbury is close to Litchfield County. It and the surrounding towns have more of a relaxed, middle class feel than some other parts of the state.

Located about 55-miles northeast of New York City, Danbury is about an hour drive from downtown Greenwich, Connecticut. If you’re up for a New England road trip this is a must on your list of stops, especially on fall foliage driving routes.

A brief history of Danbury, Connecticut

European settlers from Stamford and Norwalk, Connecticut, settled in the Danbury area in the late 1600s.

For some reason, they decided that “Swampfield” was a better name than the one given by local tribes, Pahquioque.

They changed their mind two years later and named their town after one in England.

Danbury was a major supplier of munitions to the Continental Army during the Revolutionary War. So much so that the British raided and burned the town to the ground.

After the War of Independence, Danbury’s hat making business exploded from a small, handmade operation, into a major industry.

Thanks to that 150 years or so of hatmaking, Danbury still retains the name of “Hat City”. 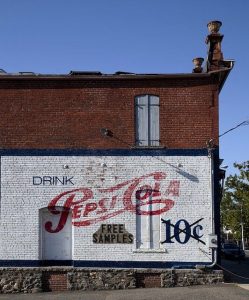 And yet, that decline saved much of the area from the rampant development you see along the Connecticut shoreline.

You don’t have to go far to find bucolic settings, both in Danbury and the surrounding towns.

Ready to plan a day trip? Then read on for the 15 most unique things to do in Danbury, CT.

15 of the most unique things to do in Danbury, Connecticut

Like much of the state, most travelers only pass through Danbury to avoid the traffic on the coast on their way to or from Boston and New York City.

And yet, an hour or two poking around town and nearby is well worth the effort.

From hiking to history, outdoor enthusiasts will delight in this corner of the state.

This 20-mile trail in the Housatonic Valley connects Danbury to nearby Ridgefield, Bethel, and Redding.

The first legs of the journey are all you need to spot glacial erratics. These are impressive boulders that have sat sentient since the end of the last ice age.

Celebrate girl power with a salute to this bronze statue depicting the nighttime ride of Sybil Ludington.

When a messenger brought word that British troops were attaching Danbury, Sibyl volunteered to ride. Despite being only 16 years old, she rode through the night to rally militiamen working on their farms.

She rode close to forty miles over the night of April 26, 1777, to rally the militia to respond.

Though they arrive too late to stop the British, they managed to harry the troops as they departed.

And thanks to the warning, there were far fewer casualties than there could have been.

Ms Ludington’s statue sits outside of the Danbury Public Library.

This statue commemorates Zadoc Benedict. This Danbury native discovered a felt-making process matting animal furs together. As a result of his business, Danbury became the “Hat City of the World”, a title they wore proudly for almost a century.

Quaint and quirky, this statue on the grounds of City Hall is emblematic of Danbury.

Along the old stagecoach road to Danbury, just over the border from Danbury, sits an attraction that inspires debate. Take a selfie at the balanced rock, an attraction that has people at odds whether it is some sort of Druid altar or a glacial erratic.

Spoiler alert, few people actually believe the rock is the work of Druids.

But what’s a trip without a bit of whimsy? 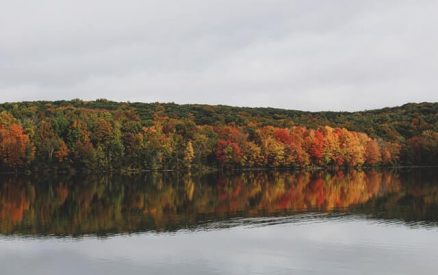 This is the largest lake in Connecticut. Formed by a hydroelectric dam in the 1920s, it spans over 5,400 acres in pristine, majestic surroundings.

This is the place to go for outdoor activities like boat rentals, water sports, and fishing.

With so many vacation homes clustered around it, Candlewood Lake has some of the area’s priciest real estate. It’s also the site of the idyllic Squantz Pond State Park. 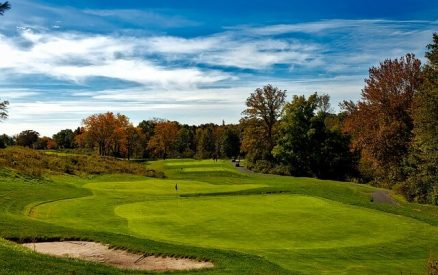 If you feel outdoor activities in Danbury CT must include a round of golf, many view the Richter Park Golf Course as the best public course in the Tri-State area.

Before turning your nose up at the public idea, this course features stunning undulating fairways sitting snug against the shores of the West Lake Reservoir.

Designed by Edward Ryder, be prepared to tame your swing if you want to miss one of the 14 water hazards on this 18 hole course.

Music lovers appreciate the name of this pond-side park, honoring Modernist composer Charles Ives (1874-1954). A native to the city, his name holds strong cultural ties to the site known for its impressive summer program of both concerts and theatre performances.

Due to the Covid-19 pandemic, Ives Concert Park has not yet scheduled any upcoming concerts.

But keep an eye on their website for updates. 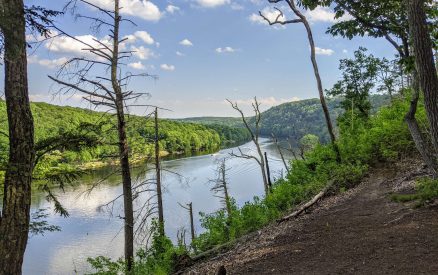 The hills of the area connect a series of stunning parks from the Hemlock Hills in the west and span east through Pine Mountain, Bennett’s Pond State Park and the Wooster Mountain State Park Scenic Preserve.

Nature’s most impressive work features peaks rising over 300 meters and landscapes dense with trees. Some of the best hiking trails in Connecticut are a short drive from Danbury.

The lovely southern foothills of the Berkshire Mountains extend from western Connecticut, through Massachusetts and into Vermont. Here, some of the most breathtaking hiking trails lead to stunning vistas.

If Danbury’s parks aren’t sufficient for your outdoorsy spirit, continue driving north into the Litchfield Hills and the Connecticut Berkshires. Some of the parks up this way, like the Flanders Nature Center, are on the list of the best free things to do in Connecticut.

If you’re looking to indulge a sweet tooth, a stop at this 140-acre orchard is a must. In fact, this apple orchard made the list of the best places for apple picking in all of Connecticut.

Depending on the time of year you can pick apples and then pack your car with an assortment of their market’s sweet treats.

Rumor has it people travel miles just to enjoy just one of their famous apple cider donuts.

Sculptures of bears and wolves by Anna Hyatt Huntington (1876-1973) are some of the most remarkable points at the entrance to Collis P Huntington State Park. 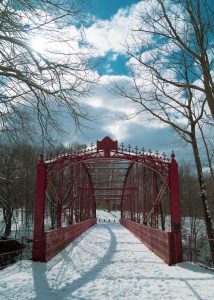 Without question, the best of the Connecticut flea markets is also the largest in New England.

You never know what you’ll find at this market in an agrarian section of New Milford on Route 7.

We’ll end this section on a grand note. Tarrywile Park’s 722 acres makes it the largest municipally-owned town Park in the State of Connecticut.

Not only will you witness some of the most awe-inspiring scenery, but the park offers access to 21 miles of hiking trails to take in the views.

However, the natural features compete with the majesty of the Tarrywile Mansion, and neighboring Hearthstone Castle. Listed on the National Register for Historic Preservation, the mansion now acts as the community center for the City of Danbury.

Stroll through the formal gardens, former dairy farm, and orchard and enjoy the bucolic appeal of the park.

Head into the hills for the romantic ruins of one of the most unique attractions in Connecticut.

The castle changed hands a few times, with the Parks family taking over in 1918. They owned the home for 70 years, naming it Hearthstone after the castle’s eight fireplaces. Despite its current sorry state, the abandoned castle strikes an imposing figure ensconced in the woods.

The city plans to create a garden within its walls, completion date to be determined.

Indoor things to do in Danbury, Connecticut

As is the case with much of the state, there are plenty of museums and indoor activities to enjoy, regardless of the weather.

Even if you aren’t crazy about trains, a love and appreciation of the Northeast’s rich past are all you need to find this stop fascinating. You’ll discover a collection of historically significant artifacts and an extensive rail yard with historic railroad equipment and rolling stock.

But what makes the Danbury Railway Museum a must is a chance to take a weekend ride on a historic train.

Fan of the macabre or all things satanic?

Or perhaps you’re a lawyer fascinated by clever defenses?

Either way, one of the most unique things to do in Brookfield CT is to visit the site of the infamous case of 19-year-old Arne Johnson. He was tried at the Old Court House for murder, where lawyer Martin Minella entered a plea of not guilty by reason of demon possession.

The judge threw out the defense, forcing the lawyer to fall back on a more conventional self-defense argument.

Still, it remains the only case in which a demon was blamed in a court of law for a defendant’s actions.

Since nothing fantastical actually happened at the courthouse, this isn’t on the list of the most haunted places in Connecticut.

You can do it all in one stop at this museum consisting of five historic buildings.

The Danbury Museum & Historical Society started to save the John Rider home, constructed in 1785, from becoming the site of a gas station.

The other four buildings that the Historical Society maintains include:

If it’s raining and you need indoor things to do in Danbury CT this stop fits the bill.

Places to Eat in Danbury, Connecticut

As far as Fairfield County goes, Danbury has some of the most inexpensive real estate in the county.

And that makes it an ideal destination for recent arrivals to America, who bring their fantastic culinary traditions with them.

Danbury and nearby towns host some fantastic international cuisines, including:

Head down to nearby Ridgefield, CT, for two of the most romantic restaurants in Connecticut. You’ll also find a solid option for barbeque in a state that’s not Southern, Hoodoo Brown Barbecue.

Wineries and breweries near Danbury

Fewer developers also means more space for breweries and wineries in the area! While wineries are usually a daytime activity, breweries are high on the list of things to do in Danbury, CT, at night.

Some great Connecticut breweries near Danbury include:

And to sip a glass of wine surrounded by bucolic scenery, your picks for fantastic Connecticut wineries near to Danbury are:

Even more things to do in Connecticut 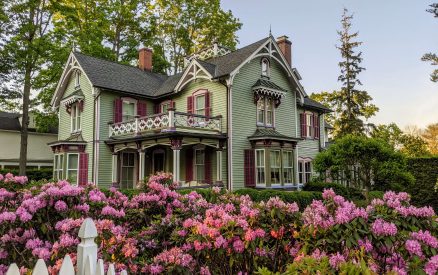 Once you’ve finished this list, keep exploring the nearby towns, many of which are some of the most charming in Connecticut:

Or continue into Litchfield County for even more quaint towns and outdoor activities. Danbury is a perfect starting point for exploring romantic places in Connecticut.

If you’re planning a fall visit to Danbury and the Litchfield Hills, be sure to explore our guide to Fall in Connecticut.

Inside knowledge of the lesser-known attractions is what makes a trip to Connecticut special.

Be sure to read our guide to the most unique and quirky attractions in Connecticut, and be sure to download a free copy of the Connecticut Travel Guide.