One of the Best Afternoon Tea Rooms in Greenwich, CT 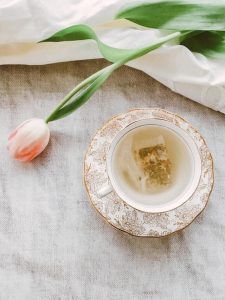 Are you looking for an afternoon tea room in downtown Greenwich, Connecticut?

Relax and enjoy a casual tête-à-tête with your friends while enjoying finger sandwiches and other dainties prepared at our downtown Greenwich, CT, inn.

In warmer months, you can remark on the flowers and butterflies fluttering by your bistro table. And in the colder months, enjoy the warmth of the fire in our bed and breakfast dining room as you catch-up with your closest friends.

Sound good to you? Read on.

Or fill out our form to schedule your upcoming tea party

The start of Afternoon Tea in CT

Around the turn of the nineteenth century, legend has it that the Duchess of Bedford started ordering tea and a light snack mid-day to keep her energy up between meals. She soon started inviting her friends to afternoon tea, followed by a walk around her grounds.

What Americans call “high tea” is actually not the aristocratic experience we think of in the United Kingdom!

After World War I, the Ritz Hotel in London began serving a formal afternoon tea to tourists, which it called, “high tea”. British hotels serving what they called high tea to tourists is likely the source of the name confusion in the rest of the world, including the States.

It shouldn’t come as a surprise that the area known as New England has long had an affinity for all things British.

And traditionally British and Victorian style have long had a presence in Connecticut. Case in point, bed and breakfasts and afternoon tea.

Opening the newest of the Tea Rooms in Greenwich, CT, to celebrate a few anniversaries

About a century ago, in 1920, women won the right to vote in America.

But the push for independence didn’t end there. In fact, many women opened female-only tea rooms across the United States. They were among the first entirely women-owned and women-staffed businesses in America.

While some tea rooms opened in outbuildings at gas stations, or free-standing buildings; many women opened their tea rooms right in their homes. Dining rooms and living rooms of American middle class women became tea rooms during the Prohibition era.

Over the last 35 years, our bed and breakfast inn has been solely focused on serving visitors to Greenwich, Connecticut.

Since taking the inn over in 2019, Innkeeper Colin wanted to provide an amenity to his entire neighborhood.

And what better way to open our doors than following in the footsteps of the great women that sparked such major social change in the early 1900s?

Afternoon tea is perfect for a casual meeting with friends and family.

And an afternoon tea party can also be a great choice for hosting:

We are currently hosting afternoon tea parties between 1 pm and 3 pm on the third Saturday of every month.

Breakfast at our Tea Room

Cady’s Tea Room is where Stanton House Inn guests enjoy breakfast (in the dining room or patio on the same grounds).

Want to learn more about our Greenwich, Connecticut, Tea Room?

When you sign-up below, we’ll also send you a free copy of our Foodie guide to Greenwich, Connecticut.

Our Foodie guide to Greenwich includes all of the top picks in downtown Greenwich and Old Greenwich, including:

We can’t wait to see you!

You can also fill-out our form to contact us regarding scheduling your tea party event on a particular date.