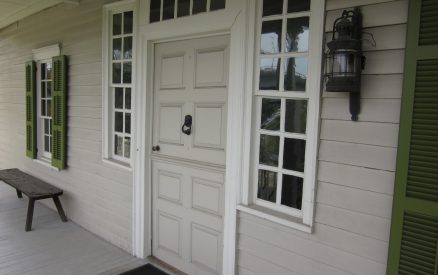 Greenwich, Connecticut, has been the border of two different cultures since European settlement.

It was first the boundary between English and Dutch colonies. And during the Revolutionary War, it was on the border between British-held New York and “rebel” New England.

You can learn about these periods and more at the Greenwich Historical Society.

This beautifully preserved historic site strengthens our ties to the history of the community. And it’s only a 5 minutes’ driving distance from our inn.

The Greenwich Historical Society is one of our favorite sites thanks to their commitment to using lessons of the past to inform our future. As a result, the past inspires smarter choices for our community.

Here’s why we admire how the Greenwich Historical Society preserves the past:

The Bush-Holley House is the heart of the Greenwich Historical Society. This 1730 National Historic Landmark is the perfect spot. Early members of the local Bush family first constructed and lived in the building.

Located in the Cos Cob neighborhood, the building survived the war between loyalist New York and patriot Connecticut. It encompasses all the things that speak to the strength, beauty and people of Greenwich.

It later became what is revered to as the “cradle” of American Impressionism. For these two reasons, the Bush-Holley House is the only building in Greenwich on the National Register of Historic Properties.

With such a long and varied history, there was no way a modern highway was going to be its downfall. The Society rescued the home from ruin in 1957 when plans to build the Interstate-95 threatened its existence. They convinced the powers that be they had to save the house, so the highway was curved to protect the historically significant structure.

The house also plays host to some of the more sinister aspects of Connecticut history.

This diverse past makes the Bush-Holley House the ideal backdrop to experience the true story behind Connecticut’s past. With all its heroes and tyrants, it’s a more intriguing story than the casual visitor would believe.

For a more in-depth history of the Bush-Holley House, read our guide to this historic house, specifically.

Art lovers flock to a major site of American Impressionism in the late 19th century. The Bush-Holley House was the gathering place for many of the most prominent American artists and writers up to the early 1900s. At the time, Greenwich’s Bush-Holley House was a boarding house. Close to the Cos Cob train station, artists used it as a getaway during those days of bohemian creativity. Today, the museum galleries’ collection features works from what’s now known as the Cos Cob art colony. It was one of the first American Impressionist art colonies of note.

In fact, Greenwich and its neighborhoods are the inspiration behind the works of noted artists including:

These artists came from NYC looking for a place to express their creativity. They transitioned from the standard works borne from the distinct yet passe styles of:

To create their own distinct hybrid.

Celebrating their national identity, American nature scenes celebrated the continent’s beautiful wilderness. It’s what separated them from the images that French and European Impressionism works depicted. This is why the movement is often referred to as “patriotic” Impressionism.

History buffs remember that New England was a hotbed for abolitionism.

And yet, Connecticut was the last state in New England to outlaw slavery.

On May 27, 2021, the Greenwich Historical Society commemorated the lives of enslaved persons in Connecticut. Stone markers identify four of the 15 enslaved persons who lived at the Bush-Holly House. Captive people lived on the property from the colonial period to the mid-19th century. A Witness Stones Memorial displays the occupations of the enslaved residents with their birth and death dates.

This is just one example of the Society’s commitment to:

Research shows about 5,100 enslaved people arrived in Connecticut before the American Revolution. And of those, approximately 300 lived in Greenwich during the 18th and 19th centuries.

The Society’s goals with this project are two-fold.

One is to honor the people enslaved at their historical sites. And at the same, to help visitors understand who these individuals were and the lives they were forced to lead. 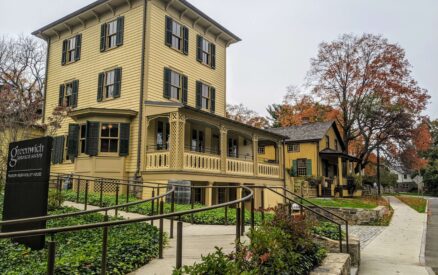 Many visitors are drawn to the allure of the art colony. And the Greenwich Historical Society’s renewed campus provides the perfect transition between the past and future.

The Society also uses technology to make its collections more accessible for today’s tech-savvy visitors, both young and old. The Greenwich Historical Society’s collections include:

In hand with over 40,000 photos all telling the story of the community.

Greenwich now requires third graders to attend the local history program at the campus. The Greenwich Historical Society also restored a former hotel and saloon from the art colony days to create a café. Even the grounds feature Impressionist-era gardens designed to reflect the property’s history.

The Bush-Holley House continues to tell the stories of the past to help shape a better future. Be on the lookout for Greenwich Historical Society events to get an even more in-depth introduction to our town.

Explore more of Greenwich, beyond the Greenwich Historical Society

There’s so much more to do, once you’ve visited this historic landmark!

Explore the charming shops, restaurants, and parks of Cos Cob.

From there, you can head on to:

Wherever the road takes you, we hope you enjoy your visit!