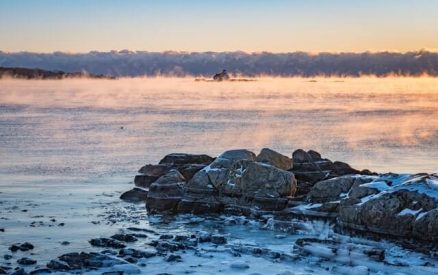 Winter in Connecticut is more like those Currier & Ives prints than some Connecticutians will admit.

Winter is all about the holiday decorations, snowball fights, and sledding.

But what more can visitors to Connecticut do?

There are plenty of activities in Connecticut in the winter, regardless of where you’re visiting.

The typical concern visitors have before coming to Connecticut in the winter is what the weather is like.

Does this sound like you? Then read on for our guide to winter in Connecticut. This guide has everything from weather to favorite activities.

As far as New England is concerned, Connecticut has the most temperate climate.

While that isn’t saying much for a Texan visiting, winters are relatively mild here.

Read on below for more details:

From December to February, it can get rather cold up here. Daytime temperatures rarely peak above 40°F (4°C) along the Connecticut shoreline. In Litchfield County (the northwest of the state), daytime temperatures average at 30°F (-1°C). 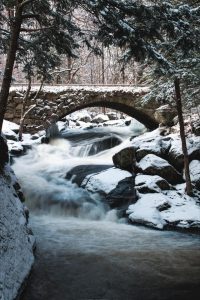 Connecticut winter temperatures are a little less than delightful.

But let’s be honest, how many places in America would you want to be outside in the winter?

Even the most pleasant winter spots have their issues, like massive or annoying insects that drive you inside anyway. Just saying.

Daytime high temperatures average from 37 (3°C) to 42°F (6°C) along the Connecticut coast (like here in Greenwich). Winter temperatures are about 4 degrees colder inland, like in Litchfield County.

How cold does it get in Connecticut in the winter?

The average low temperatures bottom-out in Connecticut between 1°F (-17.2°C) and 3°F (-16.1°C). The good news is that you’ll likely be sleeping through the coldest part of the day!

What is the coldest month in Connecticut?

The lows I mentioned above are usually in January, by the way.

In Hartford, our state capital, the average overnight temperature is 17.2°F (-8.2°C) in January. But that’s inland, almost to Massachusetts along the Connecticut River.

Does Connecticut get a lot of snow? 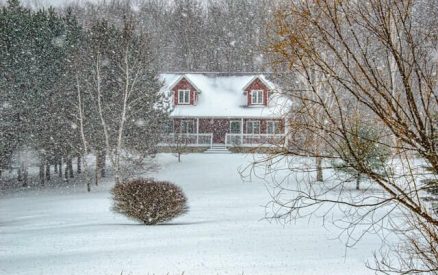 On average, yes. Connecticut does get a lot of snow.

The average snowfall of any given year in Connecticut is 37 inches, which is significantly higher than the US average of 28 inches of snow per year.

That said, it has been progressively snowing less over the years. I haven’t seen the massive snowstorms I remember from childhood in years, so you really don’t have much to worry about. Unless you go off-roading, your car likely won’t get stuck in any snow.

How much snow does Connecticut get?

How much snowfall you see in Connecticut depends on where you’re watching the snow fall.

In the northwest part of the state, places like Canton get an average of 63.96 inches of snow per year.

Towns along the Connecticut shoreline see much less snow in any given year. For example, the lowest average snowfall is Westport, with only about 12 inches of snow per year.

Here in Greenwich, Connecticut, it’s in-between, with 26.62 inches of average snowfall per year.

Will Connecticut get snow this winter?

According to the Farmer’s Almanac, yes: a very cold January will follow a cold December. February will arrive with milder temperatures, making a bearable end of the season.

How long does winter last in Connecticut?

So, how long do the low temperatures, snowfall, and bitter cold typically last here in Connecticut?

On average, about 3 1/3 months. The winter, marked by daily high temperatures below 46°F (8°C), stretches from the first of December until early to mid-March.

The coldest day of the year in Connecticut is in January.

Where should I go in the winter in Connecticut?

If you’re still reading, good on you for being so willing to brave the cold!

Even in the snowy, cold months, there’s plenty to do here to keep you busy. 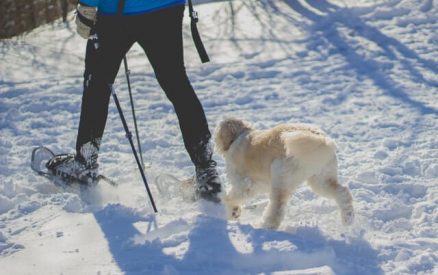 There are more than a few winter activities in Connecticut that do draw visitors.

Some of the top outdoor winter activities include:

Some favorite indoor winter activities include:

The activities you want to enjoy while you’re here will likely affect your choice of places to visit in Connecticut for winter vacation getaways.

Some top picks throughout the state include:

Greenwich Avenue is a top destination for shopping, and it’s the center of Greenwich’s food scene with its plethora of downtown restaurants.

While Greenwich has many great indoor activities, it’s also a great place to enjoy many outdoor winter activities. The parks are beautiful in the winter, especially when coated with snow and sprinkled with snowmen. And because many people are warming up inside, there will likely be fewer people, which means you’re more likely to have a park to yourself!

There are also many trails that you can hike. Just be careful because snowy trails can get slippery, so be sure to wear boots.

From museums to walks along winter beaches, there are plenty of things to do in Greenwich, CT, in the winter to keep you entertained on your getaway.

Next door to Greenwich is the city of Stamford.

Stamford is an ideal winter destination for the performing arts at Rich Forum or Palace Theatre. Some of the more unique attractions include two great breweries and an independent theater, the Avon.

Further up the coast from Stamford and Greenwich is Norwalk.

This former industrial powerhouse has been working to become a tourist destination to rival Mystic.

It has a way to go in that direction, but good on them for trying!

The SONO Collection, Maritime Aquarium, and museums like the Lockwood-Matthews mansion are all great, warm places to explore during the winter in Norwalk.

Window-shopping is one of the best free things to do in Norwalk in the winter, and it’s easy to do along Washington Street or in the entirely indoor SONO Collection mall. Both options are within walking distance of each other in South Norwalk, considered to be Norwalk’s downtown district.

Afterward, you can enjoy one of the many fantastic restaurants in the same area. Are you craving Italian? Mediterranean? Indian? There’s something for everyone.

A smaller version of New York City may not be ideal for a winter getaway, depending on where you live.

But hear me out!

New Haven can be a great place to explore in the winter.

There are world-class museums run by Yale University, like the Yale University Art Gallery. The restaurant scene is also amazing, with such hard-to-find additions like Ethiopian, Laotian, and Moroccan to go with the more common Connecticut fare of French and Italian.

This is also the site of the largest indoor ropes course in America. And if indoor ropes or walking around the city parks or hiking trails don’t appeal to you? Powder Ridge Mountain is only about a half-hour drive away for downhill skiing or snowboarding among many winter activities. 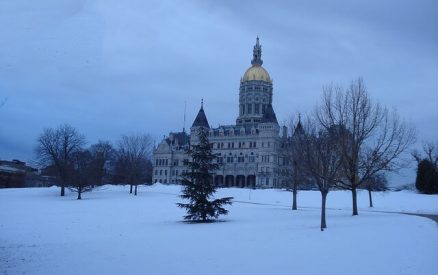 The capital of Connecticut is also worth a visit.

The added benefit is that no one goes to Hartford on weekends in the winter, so hotel rates are cheap.

As it befits a state capital, there are plenty of impressive things to do in Hartford.

A few favorite indoor options include:

Or head outside and walk-through Bushnell Park in the snow. The holiday and Christmas lights display at Goodwin Park is one of the best things to do in Connecticut in December.

How Else Can You Enjoy Winter in Connecticut?

There are plenty of options!

Check out some of our other guides:

Or see all our favorite places, attractions, activities, and things to do in Greenwich, CT, by downloading a free copy of the Visitor’s Guide.