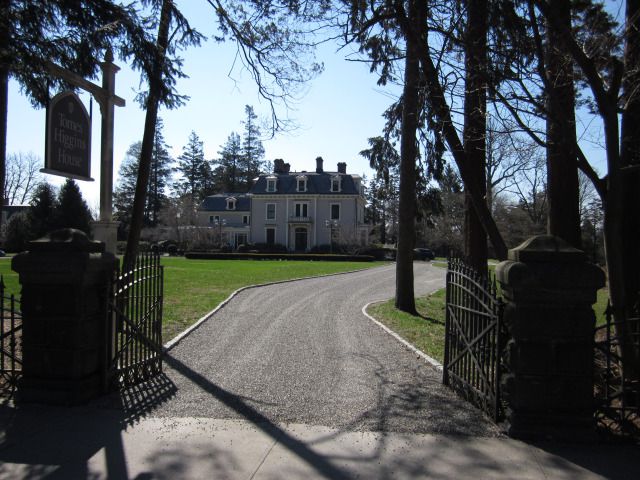 Ready for another walking tour of a historic section of Greenwich, Connecticut?

This district is known as the Putnam Hill Historic District, and would have included the Seaman-Brush House (also known as Stanton House Inn) had other more modern buildings not been constructed in between to separate it. Nevertheless, this district is one of the few remaining greenswards on Route One (known in town as Putnam Avenue, most other towns refer to it as the Post Road, short for Boston Post Road) in Fairfield County. While locals recognize it for its impressive monumental architecture and beautiful Victorian Greenwich mansions interspersed with wonderful old trees, most do not realize that this little stretch of greenery is nationally recognized as a historic district.

But important to town history it is! This district was the old government center of the town back when the commercial and industrial districts were more heavily concentrated in what are now Cos Cob and Byram (on the Mianus River and Byram River, respectively). Putnam Hill was selected as a mid-way point between those two parts of town, but was largely administrative for the first few hundred years of its existence. Second Congregational Church was built in stone in 1856 facing the first town hall (where the monument to Civil War Veterans is now). George Washington supposedly stood in front of the church and commented on the beautiful view, but every place from here to Maine that might have existed during the Revolutionary War claims that Washington slept there. If you believe that, they’ve also got a lovely bridge in Brooklyn for sale.

With the arrival of the railroad from New York City in the 1840s, this area was quickly bought-up by wealthy New Yorkers to build their own estates, hence the many impressive homes along this stretch of road.

Fancy homes like this one, next door to the Christ Church. Iggy Azalea’s got nothing on these old estate barons.

The district stretches from the cemetery beside First Congregational Church and the French Academy-style gateway to the former mansion of Jeremiah Milbank (which was quickly demolished in the 1970s before the town could stop it) past the English-style Christ Church Episcopal Church to Putnam Hill, where General Putnam escaped the British by jumping his horse off of a cliff. This suicidal act (which the horse, thankfully, also survived) earned Putnam the right to appear on Greenwich’s emblem. If you visit the park, you can still see the steps hewn into the side of the cliff that travelers would have to go up or down to travel through Greenwich. The steps became moot after a flatter way was blasted through the rock.

Besides the several beautiful Victorian homes, another notable building in the district is Putnam Cottage.  Named after the eponymous general who couldn’t stand being near British people, the tavern is actually historically called Knapp Tavern after the Knapp family who built it and ran it as a tavern during the Revolutionary War (and George Washington did, actually, sleep here). Putnam’s name was given to the building to follow the claim that he started his ride over the cliff from there, but it’s more likely he started his ride further east. In fact, the name was changed because Timothy Knapp, who ran the tavern during the War and was known for being exceptionally good-looking, was discovered to be a spy for the British, something no one in the area ever forgave him, even three-hundred years later.

Not as boring an area anymore, is it? If you’d like to learn more of the details of this beautiful Connecticut historic district, check-out the Nomination Form from the National Registry of Historic Places here, and be sure to poke around this area yourself the next time you visit Greenwich and stay with us at the Stanton House Inn! For even more recommendations on things to do in Greenwich, be sure to download our Vacation Guide!