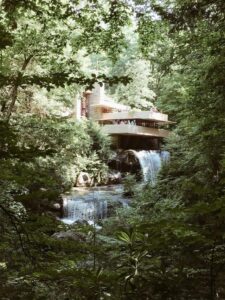 One of the most iconic modernist landmarks in America sits just an hour north of Manhattan.

Why is Phillip Johnson’s Glass House so important?

Because it tells the story of twentieth-century architecture and the innovation that started a movement. Fellow groundbreaking architects like Frank Lloyd Wright are on the roster of architectural innovators of the United States.

But it all started at this historic site, the first introduction of the International Style into residential architecture.

It might not be the first thing you think about when planning a trip to quaint Connecticut. And yet this landmark building is a perfect example of mid-century design.

The house, perched on a rocky plateau in New Canaan, CT is a must-see for anyone who has an appreciation for the talented minds that helped shape American architecture.

We also love the fact that Johnson viewed the stunning countryside as the star. He believed the estate is more of a landscape park than it was a work of architecture.

A Brief Biography of the Philip Johnson Architect

Born in Cleveland, Ohio in 1906, Philip Cortelyou Johnson found his love for architecture on various trips to Europe.

Ultimately, he dedicated his life to designing some of America’s greatest architectural landmarks.

His spectacular creations were crystalline and sheathed in glass. They typically became instant icons in their respective cities.

In addition to the Glass House, Johnson’s world-famous 20th century designs include:

Throughout his life, Johnson was a major influence in architecture, art, and design.

In 1949, he built a unique homestead unlike any New Canaan, Connecticut, had seen before:

Appreciation for the Glass-Walled Building

Johnson designed the building as his own home using glass walls he admired in the work of German architect and Bauhaus director Mies van der Rohe.

In fact, the home was a direct result of a discussion between van der Rohe and Johnson based on the idea of glass house design.

Both The Glass House and van der Rohe’s iconic Farnsworth House were the products of their ideal glass house. van der Rohe was hired by Johnson along with Lilly Reich to design his New York apartment in the 1930s.

Johnson was such a fan of van der Rohe that he organized a retrospective of his work at the Museum of Modern Art (MOMA) in 1947.

The Glass House is a perfect example of modern architecture. A single large rectangular 55’ x 33’ rectangular room hosts 1,815 square feet of living space. The four exterior glass walls overlook a pond and the surrounding woods giving a feeling you are part of the surrounding landscape.

In fact, the only portion of the building featuring walls is the bathroom, for obvious reasons.

In fact, the illusion was so strong that fellow architect Frank Lloyd Wright remarked that he wasn’t sure if he should take his hat off or leave it on when he first visited the home. Johnson lived in The Glass House from 1949 until his death in 2005. 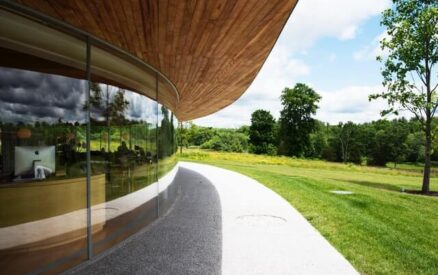 Today the home remains as it was when he lived there, defined by furniture placement.:

Tricks designers now consider common today, such as laying an area rug to define a space in the living room, are present here.

The landscape both opens the space, while also helping to create a feeling of coziness when seated at the low table and fixed furniture.

Many of the furniture pieces and artwork used by van der Rohe in Johnson’s New York apartment are displayed in the “pavilion” today. This keeps it true to the original design including a daybed he custom-designed for Johnson.

Johnson’s bedroom is separated from the common area using walnut veneered built-in storage cabinets. Despite the presence of the cabinets, Johnson still achieved his goal of having clear line of sight from anywhere else in the house. He loved the idea that he could watch the sunset and moonrise from the same spot.

Johnson and American art curator, collector, gallerist and critic David Whitney used The Glass House as a gathering place. Here, they hosted the most prominent minds of the architecture, design, and art worlds. Many an evening was spent with deep discussion and debate at one of the most elite homes in art circles at the time.

On the Edge of Danger at the Philip Johnson Glass House

Johnson’s weekend home sits out of view of the road, without any surrounding roads or buildings. At one point, he did confess he thought the idea of a glass house posed potential problems.

“…somebody just might be looking—naturally you don’t want them to be looking. But what about it? That little edge of danger…”

The Grounds of the Philip Johnson Glass House 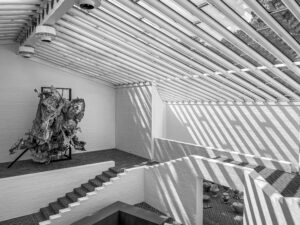 Offset from the Glass House sits a guest house completely enclosed in brick. Philip Johnson named it, appropriately, the Brick House. It contains a bathroom, library, and single bedroom with a vaulted ceiling and shag carpet.

The last structures Johnson built on the estate were a library and a red and black reception building.

Johnson claimed that, together, his one-room buildings made a complete work of art.

Now managed by the national trust for historic preservation, The Glass House offers daily tours. It presents a unique opportunity to gain an appreciation for both the architect and the landscape that inspired him.

The Glass House tour season begins on May 1st and carries on until November 30th. During your tour, experienced guides will answer questions and explain everything you’ll want to know about this iconic home. Reservations are highly recommended as tours often sell out, so be sure to get your tickets in advance!

Where to find even more unique architecture in Connecticut 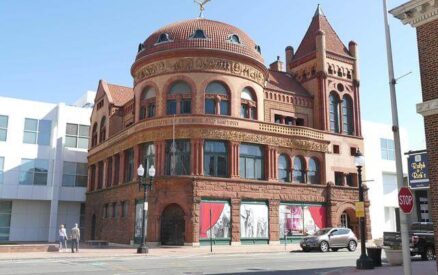 The Philip Johnson Glass House is the most famous example of modern architecture in the area.

That said, many of the most unique attractions in CT feature appealing or simply quirky architecture:

Many of the most charming towns in Connecticut also offer opportunities to explore outdoor galleries of architecture. Downtown Greenwich, Connecticut features several historic sites from the various periods of settlement and development in town.

Meanwhile, our bed and breakfast in downtown Greenwich sits in a home designed by renowned architect Stanford White in 1900.

Just going to put that out there.