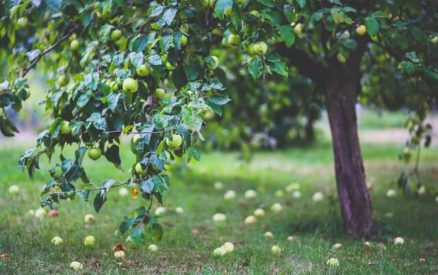 Aside from pumpkin spice, there are few things that Millennials equate closer with fall than apple picking in Connecticut.

After all, it certainly feeds into the charm of exploring fall activities in the Land of Steady Habits.

I’m going to bow to the demands of guests and confirm that there are many great opportunities for apple picking in CT.

I admit I’ve done it more than a few times, and visiting any number of Connecticut apple orchards is a pleasant way to spend an afternoon in CT in the Fall.

For our favorite places for apple picking in CT and other things to do in Connecticut and nearby, download a free copy of our Connecticut Travel Guide.

Anyway, some good apple orchards in Connecticut and near Stanton House Inn in downtown Greenwich include:

I must warn you, however, that like Connecticut maple syrup tapping, many Connecticut orchards are a bit of a drive from Greenwich.

Most of the land down this way has been turned into expensive Greenwich mansions, so you need to drive a ways from our environs.

However, the farther you go from the city, the less crowded the farms become.

It’s great for the farmers to have their apple orchards overflowing with people. But it’s not so good for the visitors who start to feel like apple-munching sardines or puffy vest-wearing cattle. 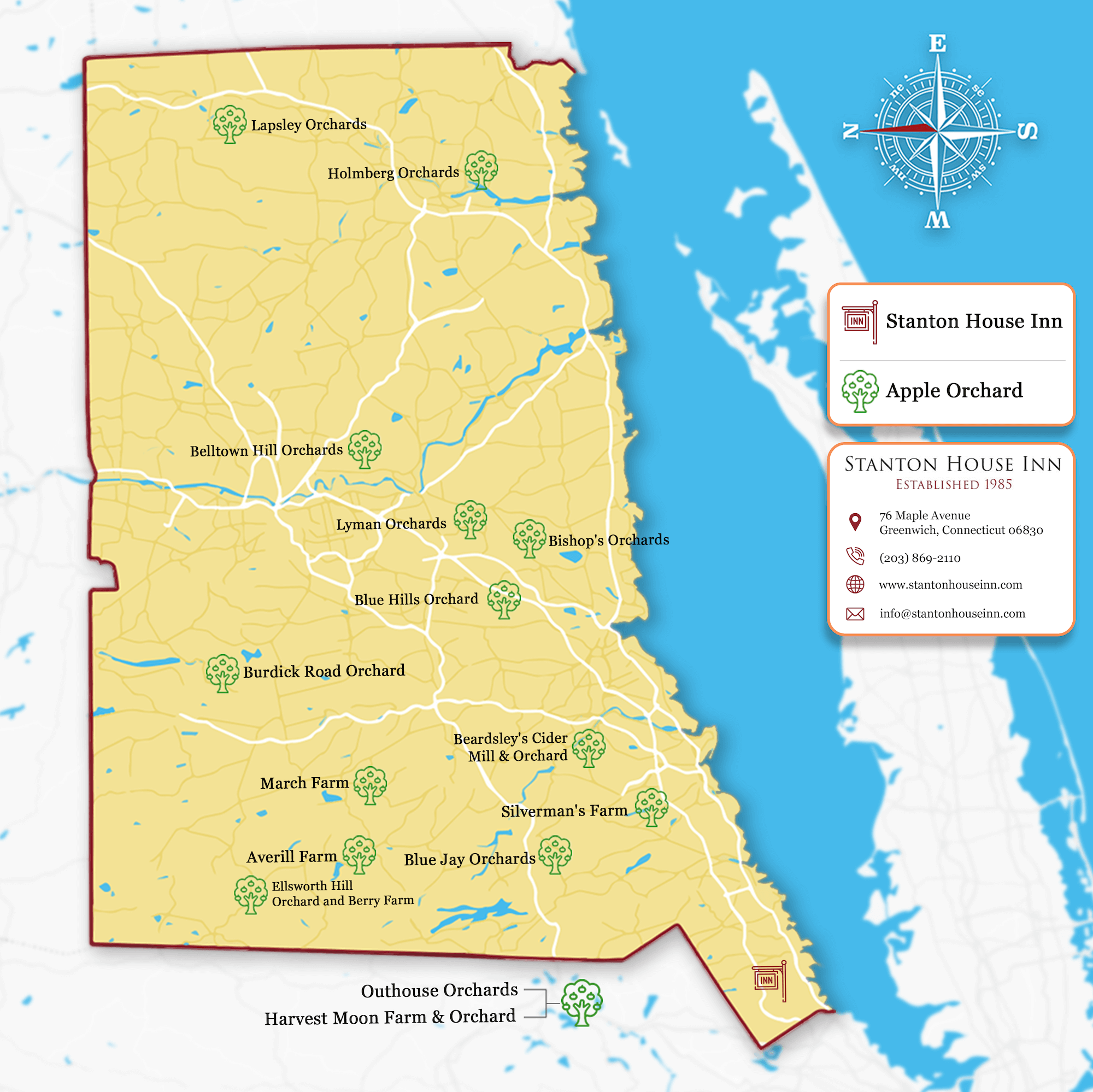 Map design by Stanton House Inn with resources from Flaticon

When is the Best Month to Go Apple Picking? 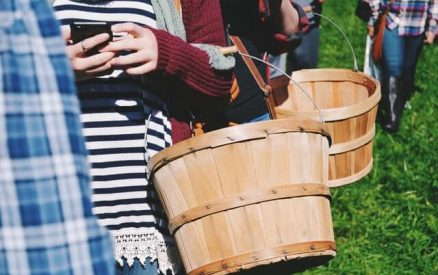 Most people go apple picking in CT from September through October. Apple picking orchards open their fields starting in July, but even mid-August is a little too early and too hot in some years.

Meanwhile, November can be too cold. Plus, there won’t be many apples left by then, if any.

The best months to pick the perfect apples are September and October. Plus, guests often equate apple picking with fall and October.

In many cases, September is less busy. Likely because it hasn’t even crossed people’s minds yet while sitting by a pool or at one of the top Connecticut beaches.

While most of the Gold Coast of Connecticut is densely settled, the outer reaches of the county still have pockets of agrarian life.

Closer to the Housatonic River, you will find some of the best apple picking spots in Connecticut. 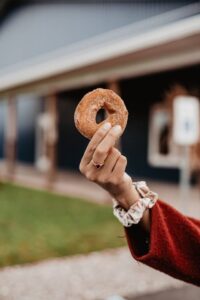 Beardsley’s Cider Mill and Orchard in Shelton, Connecticut, is about an hour’s drive away but has a wide array of apples to choose from.

The variety extends the apple picking season from mid-September (when they open for pickers) until the apples run out, usually in late October or early November.

For those wishing to avoid rainy weather (or don’t want to be bothered to pick the stuff), they also have a cider mill open until December 24th. There, visitors can watch the pressing process of converting apples to cider.

This is also the place to buy lots of apple-related and other local products, including:

Silverman’s Farm is located in Easton, Connecticut, and is about a 45-minute drive from Stanton House Inn. This farm features a gift shop, a snacks and refreshment stand, a petting zoo, farm animals, and sometimes hayrides, in addition to apple-picking in September.

Just outside of Danbury, Connecticut, in P.T. Barnum’s hometown is another top pick on the list of Connecticut apple picking.

This staple in the charming Bethel community is family-owned and has been in business longer than anyone alive can remember.

Other attractions at Blue Jay Orchards, besides their apple orchards, include a fun hayride and a beehive behind the farm store. It’s set up to allow close observation of a bee community’s inner workings without the danger of stings.

Don’t miss the apple cider donuts. Or do, if you don’t want to miss them all year.

Be sure to come back for pumpkin picking later in the fall with everyone else and knock both out in one action-packed day.

Thanks to the variety of activities, Blue Jay Orchards is on the list of the top things to do in Danbury, Connecticut. 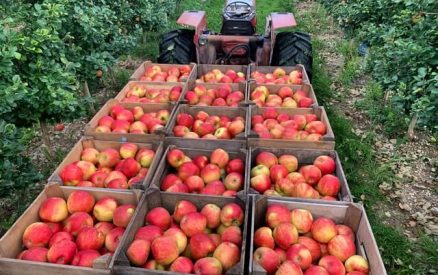 West of the Housatonic is the New Haven metropolitan area. However, calling it that makes towns like Guilford and Middlefield sound far more urban than they are.

The farms in this area have been operating for close to a century or more.

A fall visit to Lyman Orchards in Middlefield is like visiting a Connecticut fall festival.

Be prepared with plenty of cash to pay your way, but the various attractions and activities on their spacious property are worth it:

Their baked goods, especially their pies, and apple cider are famous throughout the state.

Lyman Orchards is a little over an hour’s drive from downtown Greenwich.

However, two of the best wineries in Connecticut, Gouveia Vineyards and Paradise Hills Vineyard, are close by for an after-picking aperitif.

Located an hour’s drive from Greenwich in bucolic Northford, Bishop’s Orchards is a major draw during the fall harvest season.

The apple orchards are in Northford, with many more attractions spread between the business’s two locations.

Aside from the orchards, this destination also features a creamery, winery, and farm market.

Other produce you can pick throughout the season include:

The website for Bishop’s Orchards features a calendar to help you know when produce will be ready for the picking. 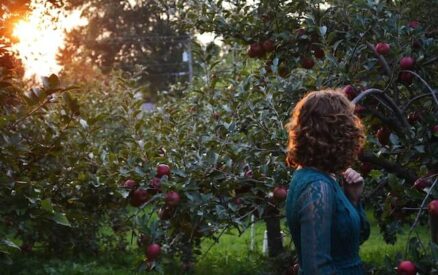 Finish up a hike at Sleeping Giant Mountain, then head to its northern slope.

There, you’ll find Blue Hills Orchard, a sixth-generation farm that the Henry family has owned since 1904.

Hosting 250 acres dedicated solely to a variety of apples, the orchard also grows peaches, plums, and nectarines. Call ahead to schedule a private hayride through the orchard!

Autumn seems to be the most perfect time to visit Mystic.

On your lengthy list of activities, attractions, and things to do in Mystic, Connecticut, be sure to add a fun apple orchard or two. 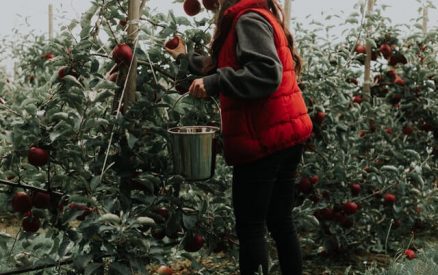 Just a 22-minute drive north from Mystic along the Thames River is one of the top apple orchards in Connecticut.

Holmberg Orchards has been operating since 1896, when Swedish immigrants Adolph and Hulda Holmberg started tilling the land.

What started as a vegetable operation has changed lives many times before diversifying to the enterprise it is today.

Aside from apple picking, this farm also features hayrides and an abundant farm market.

But one of the newest additions is also one of the most compelling: their wine and hard cider operations.

One of the most unique attractions in southern Connecticut is its wine maze, where you can get lost in the corn maze, with hard cider and wine tastings scattered throughout.

Sound quirky? It is, but it’s also very fun. 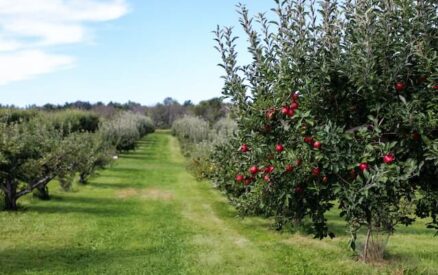 Of course, the green foothills of the Connecticut Berkshires are where farms and orchards abound.

Tack an apple orchard onto your Connecticut fall foliage driving route through one of the most charming corners of the entire state.

While many farms closer to the Connecticut shoreline have century-old histories, Litchfield cannot be beaten.

Some farms in the Northwest corner of the state have been in operation longer than the United States of America!

Small, unassuming Ellsworth Hill Orchard was the site of the first naturally pink pumpkin, harvested in October of 2001.

This has nothing to do with apple picking, of course. Just a fun fact.

Aside from the usual fall activities here of: 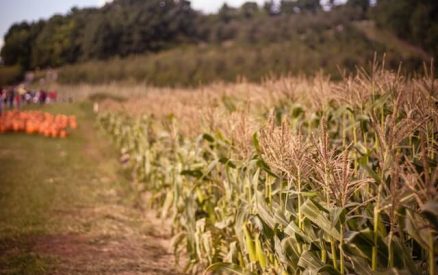 Washington Depot is worth a visit, whether you’re into apple picking or not.

This is one of the most charming towns in Connecticut and was a source of inspiration for Stars Hollow of Gilmore Girls fame.

But Averill Farm is worth visiting to experience some historic apple picking.

This is a tenth-generation farm, with members of the Averill family operating it in one form or another since 1746.

The Marsh family first started Burdick Road Farm in 1730, and the current operators have been here since 2001.

The Connecticut Trust for Historic Preservation labeled their dairy barn, built in 1895 with beams from an early 1800s barn, one of the most historically significant barns in the entire state.

Besides apple picking, visitors can purchase handcrafts and baked goods. Be sure to take a picture or two with their bright red tractor!

Operating since 1915, Hearst Connecticut’s readers awarded this apple orchard the title of having the best cider donut in the entire state.

Like much of Fairfield County, the Hartford area has converted to urban and suburban sprawl.

But you don’t need to drive far to get back into the country!

Some top apple picking orchards near Hartford include:

Across the Connecticut River from Hartford, Belltown Hill Orchards is close-by. This family owned and operated orchard has been in the Preli family since 1904. And as far as picture-perfect apple orchards go, this one cannot be beat!

Lapsley Orchard is unique on this list for being a first-generation family farm. Founded in 1984, this 60-acre farm sells directly to local customers as well as visitors.

There are plenty other varieties of produce available, though: 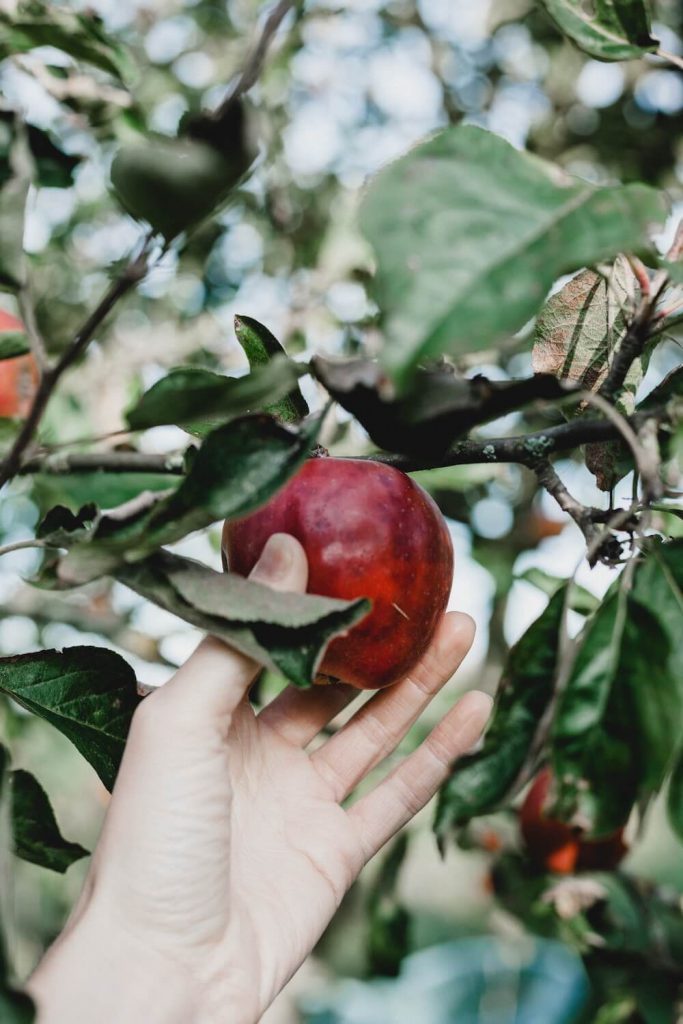 While not in Connecticut, there are several great apple orchards in Westchester County, NY. And they are just as close, if not closer than, some of the top Connecticut apple orchards. In relation to Greenwich, anyway.

Historically speaking, Connecticut Yankees were the first Europeans to settle this part of New York State. Connecticut almost went to blows with New York in the Colonial era to keep this part of the Hudson Valley in their control.

So, upper New York definitely has a New England-feel to it.

Upper Westchester County still has some large rural patches that are gorgeous to bike or drive through, especially in the fall.

Over in Westchester County, New York, is Harvest Moon Farm and Orchard in North Salem.

This farm offers a wide variety of seasonal and locally grown fruits, vegetables, eggs, turkeys, and apple cider from their own mill.

Visit any weekend between Labor Day and Halloween to take advantage of their:

As they’re on this list, they obviously offer apple-picking in September and October. Call ahead to find out what’s available at one of the best options for apple picking in NY at 914-485-1210.

Outhouse Orchards in North Salem, NY, is also worth a visit, as it’s another pick-your-own farm. It also offers a pumpkin patch and corn maze while you’re there.

So, which is the best apple orchard in Connecticut? 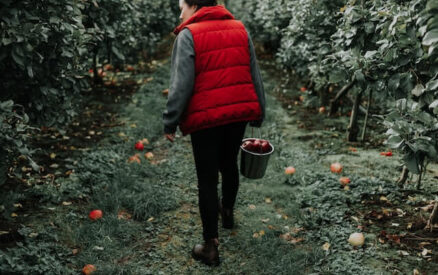 This writer has been to most of the apple orchards on this list at one point or another. And they’re all great, so let the decision fall to where you want to wind up afterward.

Planning a Mystic getaway? Then you know where to go.

Or just hit the apple orchards in Fairfield County or near New Haven if it’s all about enjoying some fall activities down on the farm.

Speaking of which, all of this is only about an hour’s drive or train ride away from New York City to Greenwich, CT. 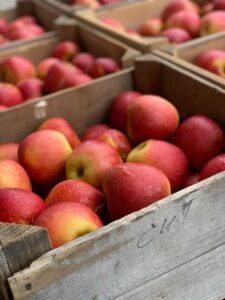 If you’re not feeling like picking your own apples but want some fresh ones and other fresh produce, you can also hit up the Greenwich Farmer’s Market.

Some more fantastic fall activities in Connecticut that don’t involve orchards include: