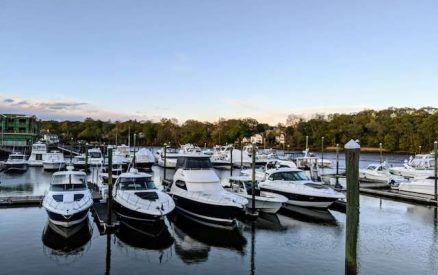 One of the best things about visiting Connecticut is its history and assortment of quirky towns and neighborhoods.

This writer is partial to a particularly quaint one called Cos Cob.

Even the name is quirky.

This charming little town stands out as the site of Connecticut’s first Impressionist artist colony.

More on that later.

If you’re looking for an artsy corner of charming Greenwich, this is the place to go.

Here’s why you should include a day in quirky Cos Cob on your trip to Connecticut.

“Cos Cob” is named after the Coe Family who settled in the Stamford area in 1641. Robert Coe owned a plantation and was very influential and successful back in the day.

While Coe is the reason for Cos, Cob actually comes from the sea wall. Robert built a wall at the mouth of the Mianus River to protect low-lying lands he gave to his brother.

Cob was the term for sea walls, especially ones made from compressed clay and straw at the time. So the town was named Coe’s Cob after the family who built the wall.

There is no denying the nautical roots of this gentrified working-class neighborhood.

The Mianus River and Long Island Sound waters are dotted with:

And yet, the area was also transformed by the influence of its historic art colony. It is the perfect day trip in Fairfield county where you’ll note the artsy, avant-garde edge that has attracted visitors to the area for a few decades.

Cos Cob CT in the Colonial Era 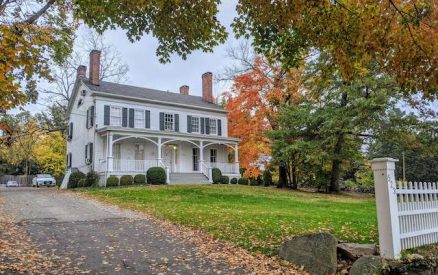 The harbor was where local farmers shipped their produce to nearby New York City.

But, as this was still New England, the soil was (and remains) terrible for agriculture. Local produce was limited to what could tolerate the rocky soil: apples, onions, and potatoes.

Downtown Greenwich actually started as just an administrative district. The area was exactly in-between the most important settlements in the colonial era town:

All that, including the agrarian nature of town, changed when the railroad arrived from New York City in the mid-1800s. 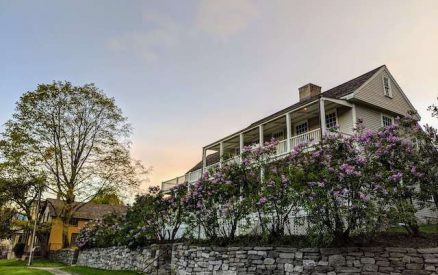 At the turn of the 20th century, Cos Cob was the hub of the first Impressionist artists’ colony in Connecticut.

On the world stage a hundred years ago, art critics snubbed their nose at America.

But they were missing out on the sweeping talent unveiled in this tiny corner of the world.

The number of artists who brought their talent here was relatively small when compared to other New England art colonies. That said, it was still the inspiration for a distinguished list of American artists including:

The colony was not restricted to just painters, but also noted playwrights, writers, and journalists.

To add to the quirk factor, it was also home to the originator of the Kewpie doll, illustrator Rose O’Neill.

Thanks to the railroad, it was an easy trip for New York painters to escape to Cos Cob.

Aside from the Bruce Museum, there really isn’t a more important spot to visit in Greenwich as an art lover.

A unique aspect of Cos Cob CT is that visitors can draw inspiration from both:

Head to the Bush-Holley House, the home of the Greenwich Historical Society.

Keep reading to find out more.

Places to explore and things to do in Cos Cob CT

Just 35 miles from New York City, the tiny population of under 10,000 is a close-knit community happy to welcome visitors to the lovely banks of the sound.

And saying the town is small is no exaggeration.

Cos Cob, CT, is a mere four and a half square miles.

The town is a highly walkable neighborhood ideal for lazy strolls to take in the many lovely views of the Sound and river.

Starting from the edge of downtown Greenwich, the Cos Cob train station, and the mouth of the Mianus River, heading inland: 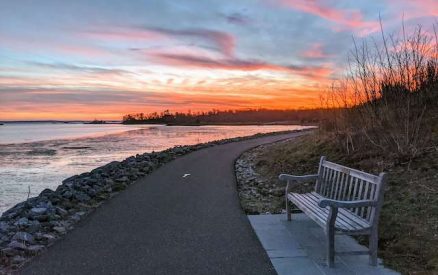 This is the newest of Greenwich’s many parks around town.

Cos Cob Park occupies the site of a former power station, when MetroNorth needed as much power along its line as it could get.

The building itself is an 18th-century farmhouse turned boarding house.

During its boarding house days, it was a gathering spot where travelers, including artists, rented rooms. It was not uncommon for the boarders as well as visiting artists to set up their easels to paint the landscape and harbor of Cos Cob.

Although Impressionism originated in France, the Cos Cob colony created their own American style of the art form. Common characteristics include broad brushstrokes and vibrant colors. You’ll also frequently notice their use of light. Be on the lookout for Elmer MacRae’s Constant Feeding the Ducks which features the boarding house grounds. The artists loved to paint in the open air or “en plein air” allowing them to take advantage of the shifts and nuances of natural light.

You can tour the very grounds that inspired many of their paintings, as well as the home of these talented artists. The museum devoted particular attention to update the grounds to match their appearance a hundred years ago. It’s hard not to feel the influences of Cos Cob’s landscape and its harbor when viewing the art.

Quaint Charm of “The Hub” 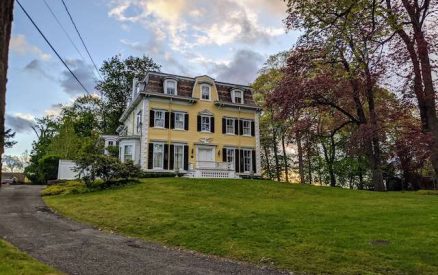 Despite its tiny footprint, there is no shortage of quaint shops and restaurants in Cos Cob’s downtown. This area, clustered along East Putnam Avenue, overlooks Mill Pond.

The residents of Cos Cob are fiercely loyal to their small community. And the small businesses and institutions here all have strong supporters.

Locals fervently support the neighborhood library and elementary school, Cos Cob Library and Cos Cob School.

And many of the local shops are decidedly unique, including:

Restaurants in Cos Cob

As befits a town with a more working-class history, Cos Cob restaurants are still heavy on the influences of the groups that immigrated here.

Italian cuisine especially makes a heavy appearance in the roster of neighborhood restaurants:

You’ll also find plenty of other culinary options in Cos Cob, depending on your taste:

This stop gets its own mention because it’s not just a restaurant or shop.

In fact, it’s a little bit of both.

Plan to stop in at The Drawing Room where you can enjoy afternoon tea in their tearoom. This destination establishment is a must-see while you’re here. Once you step off the Post Road be sure to enjoy their blended teas, fresh baked goods and artisanal sandwiches for the perfect lunch. This is not your run-of-the-mill tearoom.

Their chef creates both traditional favorites and tempting specials to indulge your inner foodie. After lunch, you can visit their Fine Art Gallery to view changing exhibits featuring:

Their newly expanded boutique is the ultimate shop to find one-of-a-kind, elegant, and distinct home décor items. Whatever you’re searching for, finds include:

Why settle for ho-hum kitschy souvenirs when you can bring home that perfect finishing touch to remember your trip to this charming  town?

The elite, private Greenwich Water Club hugging the river speaks to the up-and-coming nature of the area.

While the club’s facilities are accessible only to private club members, everyone can access their waterfront.

Hiking trails in Cos Cob CT

Head inland (or upriver) to find some solid Connecticut hiking trails fairly close to the populated parts of town.

Greenwich seems to continue to acquire estates in the backcountry part of Cos Cob to add to this park.

While not as large as Mianus River State Park, the rolling hills, lake, streams, and forests here are walkable from downtown.

Three of the main attractions at Pomerance Montgomery Pinetum are:

A pinetum is a garden of pine trees, by the way.

The more you know.

Look at a map of Greenwich, and you’ll see a green blob straddling the Mianus River along the Stamford border.

This is actually a collection of parks and conservation areas, with several different local names.

But regardless, Mianus River State Park stretches from Cognewaugh and Stanwich Roads up to the Merritt Parkway.

And the trails that pass:

Are worth exploring any time of year.

When to visit Cos Cob CT 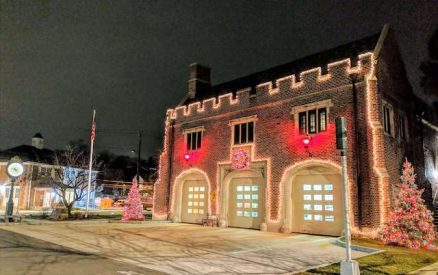 While each time of year offers a unique opportunity to explore Cos Cob, some months just seem to be better than others.

Spring is the perfect time of year to visit Cos Cob.

And if you time it right, you can take in the stunning display of blossoms on the tree-lined streets throughout Greenwich.

Be sure to pencil in time to visit the Greenwich Botanical Center, located on the grounds of the Montgomery Pinetum. The center was founded in 1957 to help promote horticulture, conservation, and the arts.

Fall foliage in Cos Cob 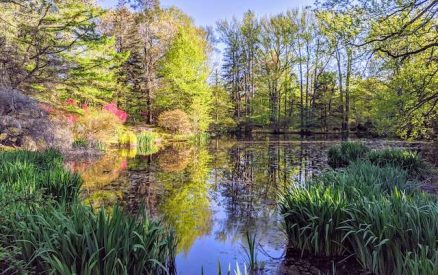 The center offers educational programs with activities and special events throughout the year. If you can’t time your trip for the spring, the fall is the perfect time to discover the beauty of dahlias. The center hosts an Annual Dazzling Dahlias Show where you can view the stunning entries.

Don’t know much about dahlias?

Not to worry, you can learn everything there is to know about this impressive, showy bloom there.

And afterwards, hike through the Pinetum and Pomerance Property to see the fall foliage sloping towards the center lake.

Find even more attractions, activities, and things to do in Greenwich

Cos Cob is a delightful place for a day trip.

Keep extending your trip and visit some of the other neighborhoods in town:

And be sure to download the free Greenwich, CT, Visitor’s Guide to all of the best attractions, activities, and things to do in Greenwich.

We hope you enjoy your visit!