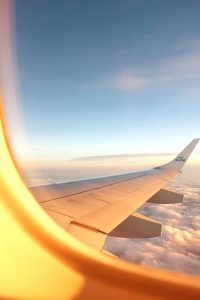 Flying is not everyone’s idea of a good time.

But sometimes, the ends justify the means. And I’m intentionally quoting Machiavelli, as preparing for and going through the motions of flying does sometimes feel like waging war.

But there’s no doubt it’s easier, faster, and cheaper to get from one far-flung corner of the globe to another by plane.

But once you’ve made the decision to fly, the next decision is to which airport. This decision is easy in most towns and cities, as there’s only one option.

One of the best attributes of Greenwich, CT, is its proximity to an abundance of airports. But that does make the decision process a little harder.

Need some guidance on deciding on traveling to the closest airport to Greenwich, CT?

What is the Closest Airport to Greenwich, Connecticut?

The closest airports to Greenwich are, in order of driving time:

Below is a more in-depth guide to each of the airports, including what airlines fly to each and directions to get from each airport to Greenwich. I also added recommendations for flying here from some major cities as well as tips for flying in a more eco-conscious way.

Westchester County Airport is a county-owned airport about 3 miles northwest of White Plains. That’s why locals often call it the “White Plains Airport”.

Flying in and out of Westchester County Airport is a delight, by comparison to some other airports. It’s small, with a limited number of flights per day. It lacks the insane hustle and bustle of many of the larger New York City airports.

And the best benefit of all for flying in and out of the White Plains Airport? It’s only a 20-minute drive from there to downtown Greenwich and Stanton House Inn.

Airlines that fly to HPN

As befits a small airport, there aren’t a ton of airlines that service HPN. But if you can snag a flight on one of them, I highly recommend it!

The airlines that offer flights to Westchester County Airport are:

As I mentioned before, Westchester County Airport is only 20 minutes away from Greenwich. The border of the airport in West Harrison, NY, actually touches the outer border of our town.

To drive from Westchester County Airport to us, the directions are easy:

Check our directions to Greenwich, CT, for guidance on reaching other points in downtown Greenwich. 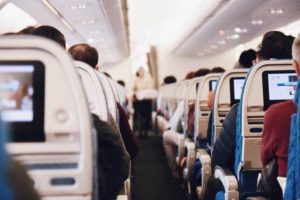 LaGuardia Airport is the oldest of New York City’s airports.

Locals often make fun of it, and dread flying here. As the oldest airport, the vibe does have an aura of memories of a by-gone day when flying was hip and cool and everyone in the ads smoked.

That said, there are some benefits to flying here. For one, after Westchester County, it’s the closest airport to Greenwich.

And compared to JFK, it’s closer to Manhattan. So it’s a faster trip if you plan on using public transportation to get from the airport to Greenwich.

Airlines that fly to LaGuardia Airport

LaGuardia’s airport code is LGA. There are plenty of domestic airlines that fly to LaGuardia. Less than JFK, but more than Westchester County Airport.

The drive from LaGuardia to Greenwich, CT, is about 40 minutes.

Driving from LGA to Greenwich, CT

Driving directions from Google Maps are way better, but if you’re in a pinch, they are as follows:

We recommend taking exit 4 rather than exit 3 if you’re not familiar with Greenwich. Click to our guide for in-depth directions for getting to and around Greenwich.

How to Take Public Transportation from LGA to Greenwich

I said it was faster to take public transit from LaGuardia to Greenwich compared to JFK, but I didn’t say it was easy.

Follow directions at LaGuardia for the most up-to-date guidance. I recommend using Google Maps on your phone, just to be safe.

From Terminal B – Upper Level of LaGuardia

Play your cards right, and the trip should take you about 2 hours, including a 25-minute walk uphill to Stanton House Inn, less if you take a cab. 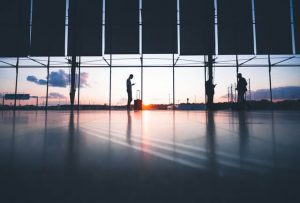 It’s massive, so plan ahead.

Airlines that fly to JFK

JFK is the New York City hub for American Airlines and Delta. It’s also the home hub for JetBlue.

The drive from JFK to Greenwich, CT, is also pretty straightforward. Depending on traffic, it can take anywhere from 45 minutes to an hour.

Driving from JFK to Greenwich

From JFK, get on I-678 North and after that, follow directions above for getting from LaGuardia to Greenwich.

How to Take Public Transportation from JFK to Greenwich

If you’re willing to trade your time for money, this is doable.

When I lived in Charleston, South Carolina, I would take a JetBlue flight to JFK airport and then take public transit. Including the walk from the Greenwich train station, this took me about 2 and a half to 3 hours.

But then I paid for an Uber between the two points, and I had a hard time going back.

As with LaGuardia, I recommend having the Google Maps guide handy on your phone, in case there are delays or something changes. Directions are as follows:

By the time you get here, you’ll feel accomplished but exhausted, spoken from experience.

Locals poke fun of the portion of the Garden State nearest New York City. I remember high schoolers used to call Northern New Jersey “Mordor” back when the Lord of the Rings movies were in vogue.

But Newark is a very nice airport. And provided you’ve got a car to get from Newark to Greenwich (and are willing to deal with the potential headache of traffic), it’s a straight-forward trip.

Airlines that fly to EWR

Newark Liberty International Airport’s airport code is EWR. It’s a hub for United Airlines, and the list of international and domestic airlines that service Newark is long.

These directions are the easiest to write, just get on I-95 North and follow it until you reach exit 3 or 4 for Greenwich, depending on how well you know our town.

Check our guide for in-depth directions for Greenwich if you need more guidance once you arrive.

I’m not going to attempt providing you with directions via public transportation because I have no idea.

Guide to Flying Here, by City

As I mentioned before, I would highly recommend flying to Westchester County Airport if possible. After a long flight, you won’t want to deal with New York City traffic if you don’t have to do so.

And after all, it’s the closest airport to Greenwich!

Before you book, hop on Google Flights and look for these flights options to get to Greenwich from:

Take a Delta flight from Atlanta to Westchester County airport.

Take an American Airlines or United flight from Charlotte, North Carolina, to the White Plains airport.

American Airlines and United fly from Chicago to Westchester.

JetBlue flies from the following Florida cities to the Westchester County Airport:

Which Airline to Prioritize Taking to Get to the Closest Airport to Greenwich, CT

If you can’t get to Westchester County Airport, I would recommend taking whatever JetBlue flight will get you as close to here as possible.

JetBlue is my all-time favorite airline to fly. It’s our local New York City-based airline and one of my cousins works for them.

How to Be More Eco Conscious When Flying 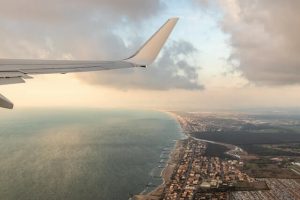 Airplanes are not the most environmentally conscious modes of transportation.

In fact, 2% of all global carbon emissions is the responsibility of the aviation industry, as admitted by the International Air Transport Association itself. That said, most critics claim the percentage is much higher.

So, a few suggestions on lessening your environmental impact from flying:

And most importantly, be selective about what airlines you choose.

Budget airlines are often more eco-friendly than expensive ones. That’s because they pack more passengers on each flight and have newer, more fuel-efficient fleets than older airlines.

And some are now working to offset their carbon emissions. JetBlue announced before the pandemic that it will offset all carbon dioxide emissions from jet fuel for all domestic flights beginning in July 2020. It’s the first major US airline to do so.

See why I love JetBlue?

Plan Your Trip Once You Arrive from the Closest Airport to Greenwich, CT

Need some help getting excited for your visit to Greenwich, so you can be ready for the travel slog?

We also recommend downloading your free copy of our Visitor’s Guide to Greenwich, CT, so that you can plan your visit well before you get here.

And if you’re not sure where to stay, check out our guide to the best Greenwich, CT, hotels.